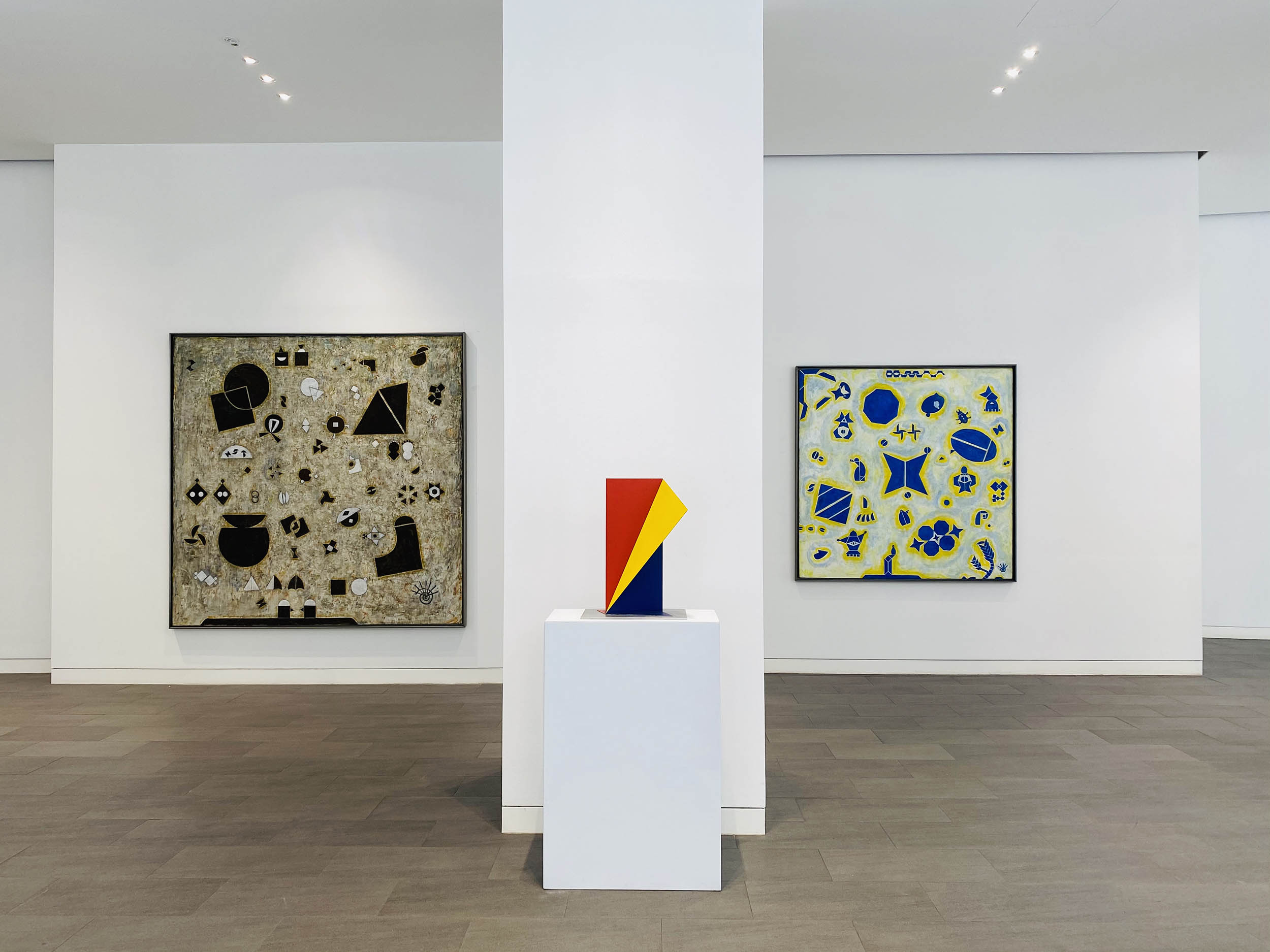 As part of a four-week pop-up exhibition in the Hochhaus Herrengasse building, we are putting paintings by Hildegard Joos in the discourse with sculptures by Roland Goeschl.

The paths of the two artists have crossed already before such as in the group exhibition
"Exact tendencies. Room concepts"
Gertraud & Dieter Bogner, Buchberg Castle on Kamp; 1983

Hildegard Joos (1909 - 2005) is one of the most important artists of geometric abstraction in Austria. Her striking development spans an arc from constructivism, concrete art and op art to narrative geometrisms and the later raster images. Subsequently, her work proved to be a stimulus for the young generation and brought about a revision and reassessment of the geometric design language in Austria. A member of the Vienna Secession since 1955, in 1962 she was the first artist whose work was presented to a staff in the main room of the Secession. From 1959 she maintained a studio in Paris, where she caused a sensation with her monistic pictures. She participated in the international development of geometric abstraction and in numerous exhibitions, such as the "Salon des Indépendants" and the "Salon des Réalités Novelles" and others.
Hildegard Joos' work marks an interface in the tradition of geometrically constructive abstraction and the contemporary discourse on painting.
The focus of Hildegard Joos' presentation is on the Narrative Geometrisms work group, an individual and unique vocabulary of forms that emerged in the 1980s together with her partner Harold Joos.

Roland Goeschl (1932 - 2016), an important representative of the Austrian avant-garde after 1945, increased the concrete geometry of his objects with the primary colors of the Bauhaus era red, blue, yellow. His "colored extension of the plastic" gives the constructivism based on pure basic forms an additional variety. The viewer, however, usually only experiences full enjoyment when walking around the objects.
In 1964 and 1968 he took part in documenta III and IV in Kassel, in the same year (1968) Roland Goeschl together with Josef Mikl represented Austria at the 34th Venice Biennale. Roland Goeschl was also a member of the Vienna Secession.
Due to the nuanced, strictly geometrical principles of choreography of repeating the same basic forms, the objects seem to be in constant motion. Roland Goeschl always reduced the richness of evolutionary varieties to simple architectural spatial compositions.

Opening hours:
by appointment only

For inquiries regarding works by Roland Goeschl, please visit the website of zs art galerie: www.zsart.at